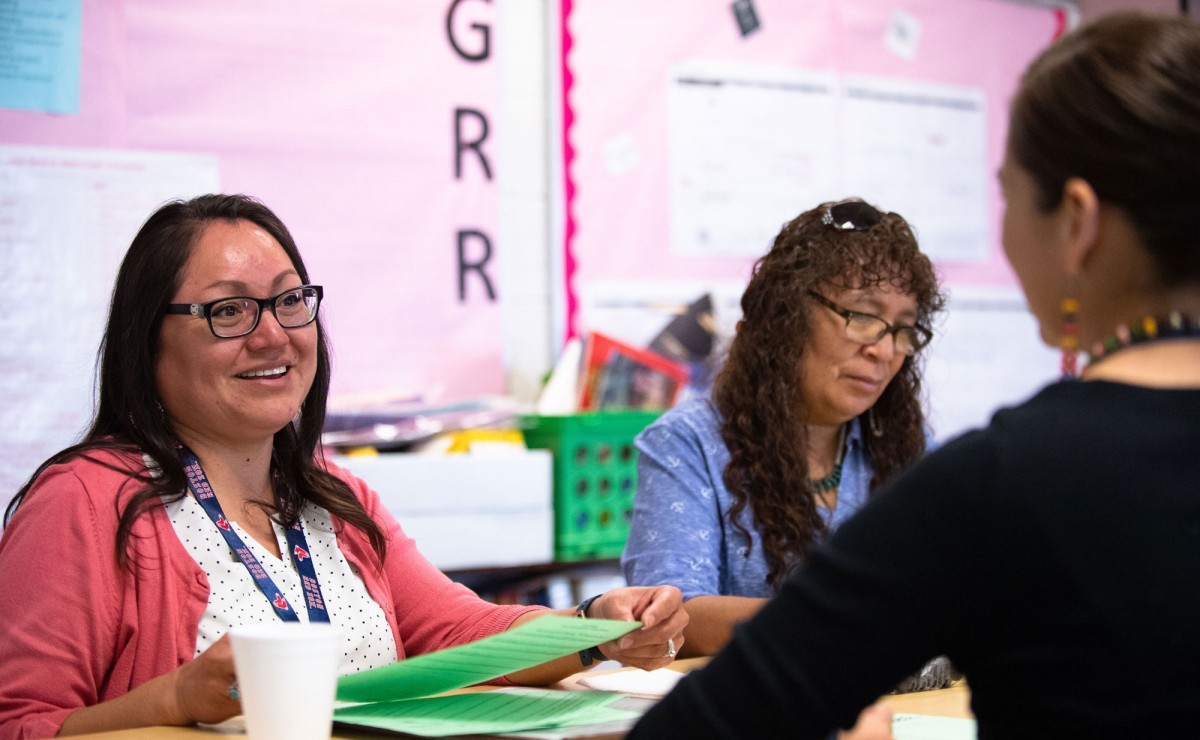 Educators benefit from ongoing, useful, evidence-driven feedback on their practice. States and districts have been reorienting supports for teachers around this understanding for more than a decade, moving to rigorous systems of standards-based classroom observations and feedback cycles focused on helping teachers improve their instruction.

Until recently, however, we often have ignored that principals need something similar. Like teachers, principals grow in their roles when they have someone to observe their leadership practice up close throughout the year, provide them with reflective feedback, and coach them to build on their strengths and address their challenges. Fortunately, districts have principal supervisors who can serve in this principal coaching and support capacity. Unfortunately, however, many districts are not yet leveraging the principal supervisor role in this way, and they are missing out on a promising opportunity to drive principals’ leadership practice forward.

That's why I am excited about NIET's new report, The Untapped Potential of the Principal Supervisor: How Support for School Leaders Should Change, which underscores what principals and their leadership teams have to gain when districts re-vision the principal supervisor role. I hope that the report helps school district leaders realize the power that can lie in refocusing principal supervisors' work explicitly on support for principals' growth and development.

What Is Effective Principal Supervision?

I have to admit that I had not given much thought to the potential of the principal supervisor as a lever for school improvement until I began working on the evaluation of the Wallace Foundation's Principal Supervisor Initiative (PSI) a few years ago.[1] The PSI was a four-year effort to reform principal supervision in six urban school districts given grants by the foundation to reorient the supervisor role away from a more traditional focus on operations and towards instructional leadership support and development for principals. PSI districts rewrote supervisors' job descriptions to set clear expectations about this new instructional leadership focus, gave supervisors training around conducting productive school walkthroughs and coaching effectively, and reduced the number of schools each supervisor oversaw so they could give each principal more attention.

What did we learn about effective principal supervision from the PSI districts?

First, supervisors spent time in their schools. The average PSI supervisor spent 49% of their work week in school buildings, according to surveys we conducted across the six districts. The average principal saw their supervisor in their building for a significant visit about every 3 weeks, and many principals reported visits every week. When not physically present in the building, supervisors kept frequent contact with their principals by text, email, and phone, or worked with principals in small network meetings.

Second, supervisors in the PSI kept a focus on developing instructional leadership. In surveys, principals across the six districts reported that more than half their time with their supervisors was devoted to instructional leadership, and in some districts this fraction was nearly two-thirds. Time on operations and other topics, although still part of the work, was compartmentalized to make room for this new priority.

Third, supervisors saw their primary function as feedback and coaching. School walkthroughs or "learning walks" were the vehicle for feedback, with principals and supervisors jointly visiting classrooms to observe instruction. Afterward, they would discuss what feedback the principal might give the teacher or, sometimes, the supervisor would observe the teacher feedback conversation and then debrief with the principal about what they observed. Supervisors created other opportunities to coach principals as well, such as through engaging alongside the principal with the schools' data or observing school leadership team meetings.

Principals felt benefits from this shift in supervision. As we documented in our final report on the PSI, principals felt more supported by their supervisors and that that support had improved their own capacity to improve instruction in their buildings.[2]

Of course, principal supervisors do not operate in a vacuum, and how much they can shift their role toward supporting principals' instructional leadership will depend on conditions in their district. Even with the large grants and other supports provided to the PSI districts, the districts varied in their success in reshaping supervisors' day-to-day work. Over four years of observing these shifts, we learned a bit about what districts can do to set their supervisors up for success.

District leaders did more than just communicate expectations, however—they changed how the central office did business to create space for supervisors to meet them. They protected supervisors' time. They moved operational responsibilities into other departments. They created network support teams to give principals “go-to” people other than their supervisors in areas that they often needed help, such as human resources or special education. They streamlined central office meetings or scheduled them on the same day to free up opportunities for supervisors to be in schools.

Where the change was successful, districts also ensured that each supervisor was not supervising too many principals. Supervisors cannot do deep work with their principals if they are forced to spread their efforts too thin.

A recent report I coauthored—also for the Wallace Foundation—synthesizing two decades of research on school principals documented the substantial impacts effective principals have on student learning and on a host of other student and teacher outcomes.[3] Indeed, we concluded in the report that it is difficult to envision an investment in schools with a higher ceiling on its potential return than a successful effort to improve principal leadership.

Leveraging principal supervision for principal growth can be this kind of worthwhile investment. We already know that coaching can move principal practice. Focusing supervisors' work on coaching to develop principals' capacities in the right areas—engaging with instruction as well as related domains of high-impact practice such as building climate, promoting collaboration, and managing strategically[4]—can be a path to better principal leadership and school outcomes.

It's time to seize this opportunity and reorient supervision towards supporting improvement in principals' leadership practice.

[4] See Grissom, Egalite, and Lindsay (2021) for discussions of these areas of principal practice research suggests are most associated with student outcomes.

A Day in the Life: Take a Look Inside an Award-Winning School in Arkansas