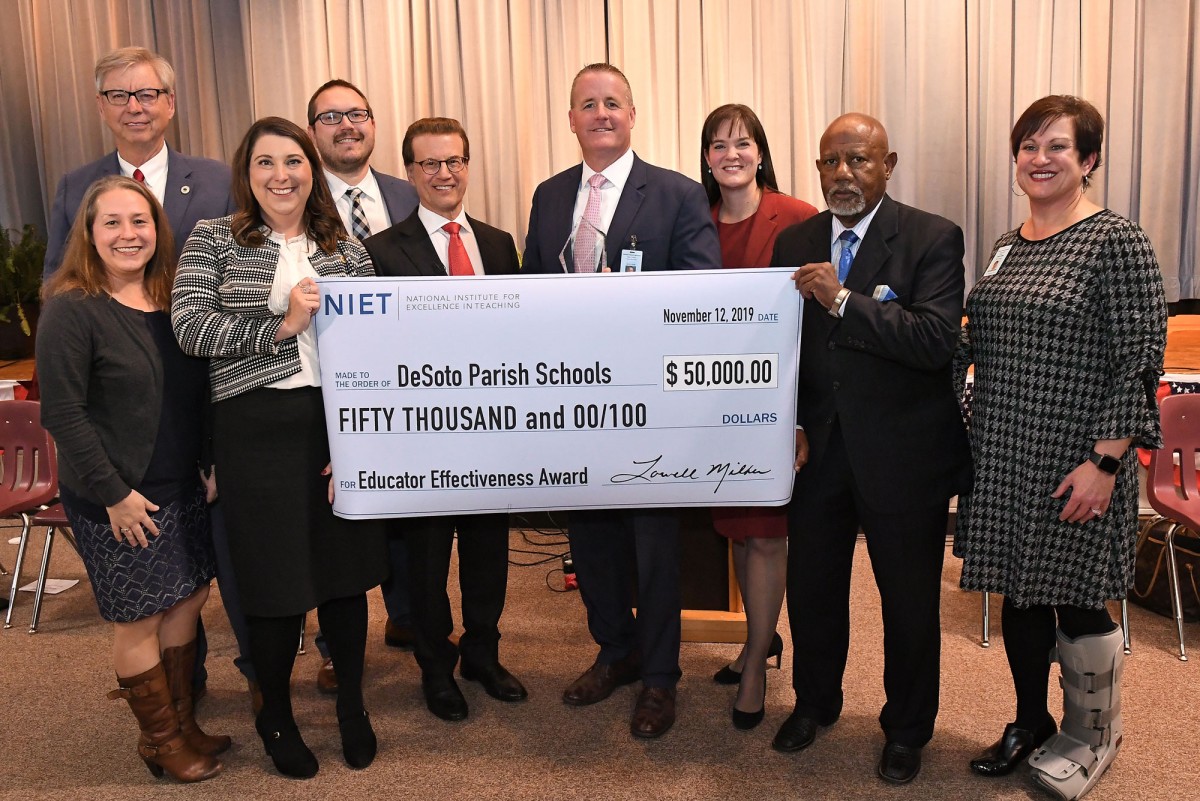 DeSoto Parish Schools' focus on educator excellence and student success was celebrated today when it received a $50,000 award from the National Institute for Excellence in Teaching (NIET). NIET Chairman and Founder Lowell Milken and CEO Candice McQueen surprised DeSoto Superintendent Clay Corley with the District Award of Excellence for Educator Effectiveness during an all-school assembly at Mansfield Elementary School.

This is only the second time NIET has given this award, which honors school districts that have focused on supporting excellent instruction and improving student performance. DeSoto was chosen for this award because of its decade-long commitment to investing in educators’ professional growth, fostering teacher leadership, and increasing student success.

"DeSoto Parish Schools is a model for the nation and an example of how a commitment to high-quality teaching can change the lives of students," Milken said. "The district's dedication to continuously strengthening teachers' professional development has been sustained and deepened over time, with each leader over the past decade helping the district further its progress. I commend every teacher and leader in DeSoto for their hard work in making educator effectiveness the cornerstone of their efforts. It has resulted in meaningful improvement in student achievement."

"We want everyone to know DeSoto's story,” Dr. McQueen said. "They have shown how a sustained and relentless focus on human capital development and strong core instruction every day has the power to improve the outcomes both for students in classrooms right now and those who will sit in their desks for years to come. The growth DeSoto's students have shown is remarkable – moving from 45th in the state in 2009 to 12th in the state in 2019. We are privileged to honor them today and believe every district in the nation should take note."

In 2008-09, DeSoto began partnering with NIET to implement the TAP System for Teacher and Student Advancement, which is a whole-school approach to improving teaching and providing opportunities for teachers to grow as leaders. The TAP System is grounded in research, recognizing that teacher quality is the No. 1 in-school factor for student success. TAP puts teacher leaders at the forefront of school improvement and equips them to coach and support their peers through evidence-based tools and strategies, with a focus on continuous improvement and professional learning. TAP has shown success in schools in Louisiana and across the country with closing achievement gaps, increasing student achievement, improving teacher retention, and strengthening teachers' abilities.

At the time DeSoto began to implement TAP, student success was lagging. The district's graduation rate in 2008-09 was 67.8%, and in 2010 the district was ranked #45 in the state. Thanks to educators' work and leaders' commitment to TAP, that has changed. Among the highlights:

DeSoto's transformation demonstrates the power of high-quality teaching practices and how a commitment to excellent teaching focused on high expectations every day can overcome barriers. Student demographics and population have remained relatively unchanged over the past decade, with a majority of the 5,000 students classifying as economically disadvantaged. Now, faculty in DeSoto schools focus on developing a growth mindset for individual students and teachers alike, and they are continuously strengthening their commitment to effective instruction.

About NIET
NIET awarded the first District Award of Excellence for Educator Effectiveness to Perry Township in Indiana in 2018. The award is a surprise, with NIET identifying the recipient based on its continued and districtwide success in demonstrating effectiveness in teaching and strengthened outcomes in student learning.

For two decades, NIET has partnered with schools, districts, states, and universities to build educator excellence and give all students the opportunity for success. NIET's initiatives, including TAP, teacher and leader development, school improvement, rubric and observation systems, and educator preparation, have impacted more than 275,000 educators and 2.75 million students across the U.S. Learn more at niet.org.