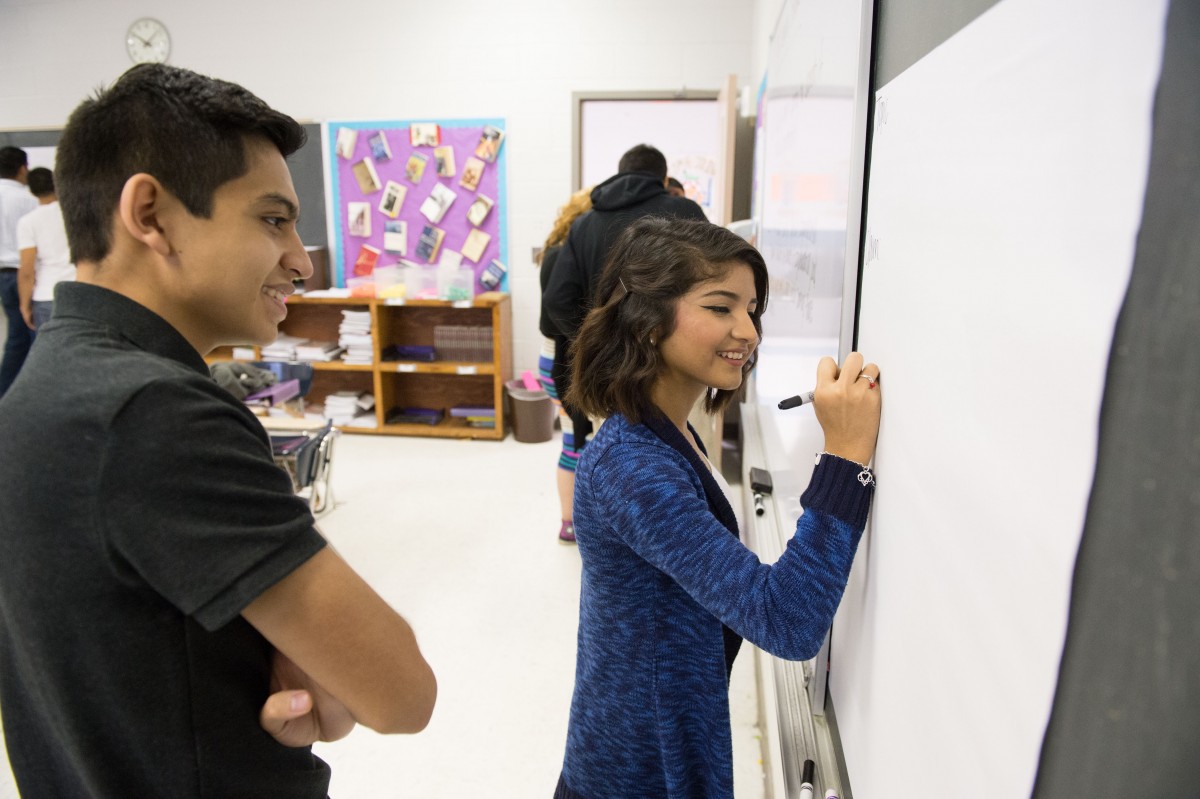 New Orleans, Louisiana—The National Institute for Excellence in Teaching (NIET) today announced six finalists for the prestigious TAP Founder's Award. Created by NIET Chairman and TAP Founder Lowell Milken, the TAP Founder's Award is given annually to one school for exceptional efforts to implement and represent the principles of the TAP System for Teacher and Student Advancement – resulting in significant and sustained increases in student achievement, among other goals.

The TAP System is America's leading comprehensive educator effectiveness model that aligns teacher leadership, daily job-embedded professional development, meaningful evaluation and support, and opportunities for performance-based compensation. TAP has been on the ground for more than a decade. It supports schools, districts, universities and states in their missions to strengthen classroom instruction with the ultimate goal of improving learning growth for all students.

Funded by the Lowell Milken Family Foundation, the TAP Founder's Award includes a $50,000 prize to be used toward continuing to improve classroom teaching and student success. The finalists' names were publicly revealed at the 16th National TAP Conference in New Orleans, Louisiana, before 1,000 educators, policymakers, researchers and other influential leaders. The announcement of the TAP Founder's Award winner will take place at a luncheon tomorrow, March 19, 2016.

Each finalist school implements the TAP System by establishing leadership teams, made up of master and mentor teachers as well as administrators, who drive instruction on campus. These teacher leaders guide weekly professional development and provide individual coaching in classrooms.

TAP's teacher leadership opportunities and professional development are complemented by meaningful systems of educator evaluation, feedback and support, as well as a compensation system that rewards educators for increased skill and student performance, and for taking on new leadership roles and responsibilities.

According to Principal Theresa Nickolich, the TAP System is helping teachers and students alike at Clarendon Elementary School analyze data to set goals, create action steps and monitor progress. Since implementing TAP in the 2010-11 school year, the professional development meetings have provided a hub of intense collaboration and focus for teachers. They institute formative assessments to track where students are and adjust instruction accordingly. This is important in accommodating a student population of whom 87% are eligible for free/reduced-price lunch, 67% are Hispanic, 15% are English Language Learners (ELLs) and 21% have learning disabilities.

The TAP rubrics have played an essential role in training educators how to analyze data effectively and using the findings to maximize the impact of all the school's initiatives, including Dual Language, Walking Classrooms, the Samsung Solve for Tomorrow project, Corgan Future Architects, and Play20.

To take learning to the next level, Clarendon faculty have placed a priority on making students accountable for their own progress. The effort began in 2011 when students started taking the NWEA MAP (Northwest Evaluation Association Measures of Academic Performance) assessments. During that year, teachers analyzed the data to differentiate instruction. Individual data talks with teachers began the following year. Next, teachers held data talks with students. Then, students analyzed their own NWEA data to the point of holding student-led conferences, which empowered them to take significant stakes in their own success.

As a result, Clarendon Elementary has achieved a consistent value-added score of 4 on a 1-5 scale, indicating that the school has made more than a year’s worth of growth compared to similar schools in the state.

Before TAP was implemented at Dodson Branch Elementary School in the 2013-14 school year, Principal Tammy Woolbright explained that the small, rural school was known as a "stepping stone" for teachers to move to other schools or districts. The Professional Learning Communities (PLCs) operated more like grade level meetings, lacking many of the critical components of focus, data analysis, relevance to individual student needs and follow-up that drive the TAP professional development meetings today. Student value-added scores were also stagnant.

The TAP System has turned Dodson Branch's conditions around, transforming the campus into a nurturing environment that motivates, supports and instills confidence in teachers. The reflective nature of TAP's professional development meetings and collaboration as a team to move all students forward have made teachers excited to teach and students inspired to learn at higher levels.

These characteristics have made Dodson Branch into a destination of choice for teachers. In turn, learning gains for the student population, of whom 82% are eligible for free/reduced-price lunch, have soared. The school has earned a value-added growth score of 5 on a 1-5 scale, indicating that students are significantly exceeding targets when compared to results of similar schools in the state. Woolbright herself noted that "TAP has had a more significant impact on my leadership than any other initiative in my 28 years as an educator."

Greer Middle College Charter High School (GMC) faced a challenge of attracting highly effective teachers to its smaller charter campus. Upon the implementation of the TAP System four years ago, word spread of its opportunities for support and more compensation, and significantly more applications started rolling in.

Principal Jimmy Armstrong describes the GMC TAP Leadership Team as a "cohesive unit" that "systematically supports and develops all staff." The faculty constantly analyzes all school, content, and teacher- and student-level data to identify strengths and weaknesses, train teachers on how to address them and chart student growth.

When establishing its school goal, GMC brought all teachers to the table to analyze ACT data. The development of students' analytical thinking skills was targeted as a key student need to address during the current school year. Each staff member was involved in the decision-making. This important professional development meeting set the stage for future meetings, conversations, the establishment of student learning objectives (SLOs), benchmark testing and field-testing. What's more, it empowered and motivated teachers to focus on their goals and aim high.

GMC's successful implementation of the TAP System has led to consistently high value-added student achievement gains. Each year in TAP, the school has exceeded growth targets when compared to similar schools in the state.

Nestled in the small, rural city of Mansfield in DeSoto Parish, Mansfield High School is home to a team of driven teachers and students, thanks to the supports developed through use of the TAP System implemented in the 2008-09 school year. For while it may be a challenge recruiting educators to rural areas, educators are attracted to Mansfield High School because of the compensation and support that TAP offers. This benefit is particularly important in the school's efforts to provide an effective classroom teacher for every class for its all-minority student population, of whom 87% are eligible for free/reduced-price lunch.

According to Principal Sedric Clark, upon being hired, new teachers immediately take part in the school's TAP One-on-One program, which has since been adopted by the district. In the program, they are assigned to a mentor teacher who briefs them about TAP processes. They then meet with master teachers to cover everything from terminology, performance standards and formative assessment tools to rubric descriptions and sample lessons. The program is capped off with daily feedback from the TAP Leadership Team and opportunities to conduct classroom visits with peer teachers.

This comprehensive training early in the process helps put educators on a path to continuous improvement and greater reflection. Working together through TAP's weekly professional development meetings has allowed faculty to hone in on areas of need and turn weaknesses into strengths. As a result, student learning growth has soared.

Schoolwide, Mansfield High has achieved a 22.8 increase in its school performance score since 2010, jumping from 71.1 in the 2010-11 school year to 93.9 in the 2014-15 school year. Its value-added student achievement growth has gone from meeting benchmarks to exceeding them when compared with other schools in the state.

The TAP System is so ingrained into Somerset High School's culture that training begins during the hiring process. The interview process aligns with the TAP vision for the campus so that teachers know the high expectations set for them and are prepared to reflect on their practice with student achievement at the forefront. With a strong TAP Leadership Team helmed by Principal Angela Martinez, a former TAP master teacher, coupled with the commitment of the Somerset Independent School District, Somerset High teachers have a firm foundation for growth and are motivated to succeed every step of the way.

To Martinez, the students' stake in their progress is equally as important as the teachers' accountability of their own performance. Bringing students to the table has been a priority for the school, whose student population is 89% Hispanic with a free/reduced-price lunch rate of 75%. Sixty-two percent are classified as "at-risk." The TAP structure, implemented in the 2012-2013 school year, has allowed Somerset High to target instructional strategies to specific student needs, which has been critical to its growth as a campus.

In addition to the formation of a Student Advisory Council to present concerns and needs of the student body, Martinez and her team have involved students in the TAP professional development process. A group of 40 were selected to identify areas of refinement and reinforcement of their instructors based on student data. The exercise proved to be powerful, strengthening the alignment between teacher and student needs and making the team more cohesive as a whole.

As a result of using student work to define needs and improve individual student performance, writing scores increased from 32% in year one of TAP to 64% in the 2014-15 school year. Schoolwide, Somerset High is consistently meeting growth targets when compared to similar schools across the state.

Southport Elementary Principal Dr. Danny Mendez has described his school as "empowered, reflective and limitless" as a result of TAP’s implementation there beginning in the 2011-12 school year. One of his main goals for adopting the TAP structure was to close achievement gaps, particularly for ELLs, special education, and economically disadvantaged students.

The school's ELL population has grown from less than 3% nine years ago to 56% today. Similarly, students eligible for free/reduced-price lunch jumped during that time frame from 45% to 81%. Unique to Southport Elementary's student population is that 40% represent refugees from Burma, many of whom have never attended school due to religious persecution in their home country.

"The TAP System is a perfect fit," said Mendez. "The focus and structure TAP gave us to systematically improve instruction led to dramatic results. The growth has been substantial for our most challenging student subgroups."

In the 2011-12 school year, Southport Elementary's school letter grade was a C, and with the help of the TAP structure, increased to an A in subsequent school years. At the same time, schoolwide value-added growth also steadily increased. Compared to similar schools in the state, Southport Elementary went from a 3 (meeting targets) to a 5 (significantly exceeding targets) on a 1-5 scale. In terms of its ELL population, the percent of students proficient or advanced on the state test increased from 33% in 2012 to 63% in 2014. For those eligible for free/reduced-price lunch, the passing rate moved from 66% to 77% during the same time frame.

TAP Founder's Award recipients are selected without their knowledge by NIET, which manages and supports the TAP System. The honor is based on distinction in the following areas: proficient implementation of TAP’s four elements, student academic growth according to state or federal measures, and notable recognition as a center and resource of best practices.

For the announcement of the TAP Founder’s Award winner on March 19 or for more information on the 16th National TAP Conference in New Orleans, visit http://www.niet.org.